Built in 1916, Pierce Hall was commissioned to be a Community Center by Julia Pierce and Ellen Pierce, in memory of Chester Pierce Sr., and his son, Edward L. Pierce. The Pierce sisters planned and envisioned the structure as a community center. It was designed by local architect Charles Kinsman. At its 1916 opening, over 600 community members attended, welcoming this glorious center to the Valley. 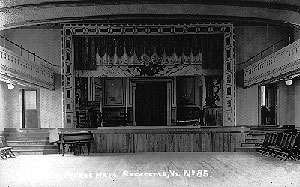 In 1932 Pierce Hall was given to the Mason Rural Lodge #29 F&AM. The building still functioned as a community center with town meetings, theater events, movies, and roller skating. In 1971 the Masons deeded the Hall to the Rochester Town School, which used the building for kindergarten and shop classes. The Masons also continued to meet at the Hall.

In 1973, because of needed repairs and an inadequate heating system, the State Fire Marshall’s office condemned the building for public gatherings. When the current Rochester High School opened in 1974, Pierce Hall was deeded back to the Masons, who renovated the Hall for limited use of the space. The Masons owned and occupied the premises for almost thirty years.

AN HISTORIC SITE
Pierce Hall is listed with the State of Vermont’s Division of Historic Sites, and its location in the town of Rochester has been determined to be part of the Designated Village Center. 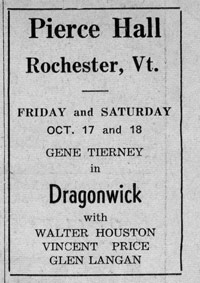 Pierce Hall is integral to the cultural heritage of this Valley, and its architectural integrity will be retained. The stage has a handsome proscenium arch and a fly loft to augment the space. The seating is flexible—for theater in the round or standard row seating of at least 350 people. For banquets, more than 200 people can enjoy the grand and historic atmosphere, and the U-shaped balcony has fixed seating for at least 100 people. The overall dimensions of the main floor are 50 by 100 feet, perfect for large gatherings as well as the returning of the legendary roller skating. 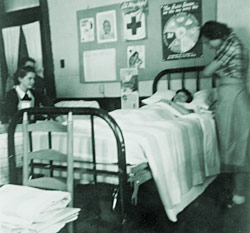 REVIVAL
In 2001 nine community members, Charlie Biederman (deceased), Ken Landis, Dean Mendell, Ann Mills, Dick Robson, Nancy Sanz, Midge Scanlan, Kathryn Schenkman, and Bill Zucca created a non-profit association (PHCC) to begin discussions with the Masons to restore Pierce Hall to its original beauty and its use as a viable community center. In September, 2002, Valerie F. Levitan, Ph.D was asked to serve as the (volunteer) Executive Director. In May, 2004, the Masons voted to give Pierce Hall to PHCC, Inc., in exchange for a permanent meeting place within the building. October of 2004 PHCC, Inc., received through deed transfer, ownership of Pierce Memorial Hall.

During 2004-2005, PHCC worked with the Preservation Trust of Vermont on plans to most effectively maintain the integrity of the building and to restore the facility to its original design. Through a series of ongoing meetings, proposals and drawings were discussed and reviewed. On October 21, 2005, The Preservation Trust of Vermont approved the concept designs for the restoration and additions to Pierce Hall. On November 1, 2005, the PHCC Board of Directors voted and approved plans for the Project Architect Robson Bilgen to proceed with the drawings.

We have WiFi at Pierce Hall

For winter months (Oct – Apr) a $50 heating surcharge per day is applied.

See the Hall Rental and Usage tab at the top for further information as well as a contract to print out.